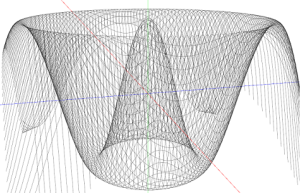 This is the same as the 3D wireframe example which was done in OpenGL, only ported to the new technology known as WebGL. WebGL is still a new technology that uses GPU acceleration to render 3D graphics in a web browser and it has shown vast potential to modernize the web.

Many browsers do not even fully support WebGL at the moment. As such, to view this example you will need an updated, modern browser such as Firefox, Chome, or Opera. Internet Explorer does not support WebGL rendering at the moment unless you install a plugin.

This demo relies upon the GLGE and GLGE_math libaries in order to render.